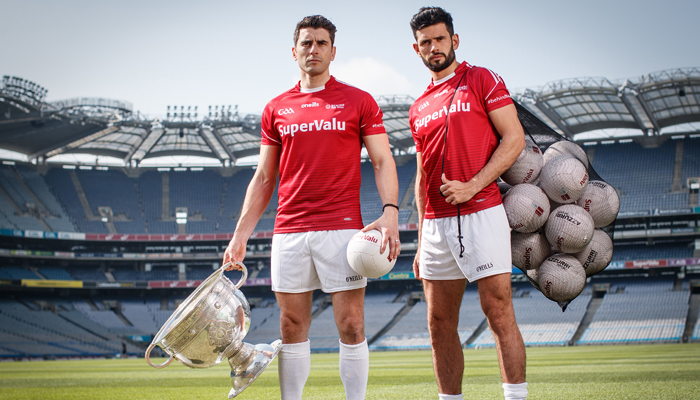 SUPERVALU GETS BEHIND THE BALL THIS SUMMER WITH THE GAA

Ireland’s leading retailer to encourage families and children across the country to get more active as SuperValu’s Move More Index reveals;

58% of families are concerned about their children’s screen time


31st May 2018: Now in its ninth year as sponsor of the GAA All Ireland Senior Football Championships, SuperValu is once again getting #BehindTheBall this summer.  Ireland’s number one retailer is set to embark on an ambitious nationwide campaign to combat the lack of exercise amongst Ireland’s families through several initiatives including SuperValu’s Take Ten – a campaign that encourages families to take ten-minute bursts of daily exercise and get behind the ball.  SuperValu will also continue its campaign to get children playing football by placing a GAA football into the hands of 55,000 children around the country bringing the total number of footballs donated to children by SuperValu to 110,000 by the end of 2018.

Concerned with the knowledge that Ireland is facing a future of an in-active and over-weight population, research undertaken by the SuperValu Consumer Insight & Analytics Team – The SuperValu Move More Index; shows that Irish parents’ number one concern regarding their children is “the time they are spending in front of a screen”.  58% of parents confirmed that they’re either most concerned or concerned that their children are spending too much time on their smartphones, tablets, laptops or even watching the TV instead of playing sports and getting exercise.

Furthermore, there appears to be somewhat of an over-reliance on the schools as an outlet for children’s exercise routines as 73% of parents stated that their children do most of their exercise at school with less than half of respondents claiming that their children exercise at home.   Although 82% believe that it is important to undertake regular exercise with their children, only 28% exercise “occasionally” with their family despite the fact that the majority consider that “spending quality time together” as the main benefit of exercising as a family.

Specifically, whilst Irish adults (70%) consider exercise to be important in their weekly routine, only 28% are getting the recommended daily exercise of 30 minutes.  The advised guidelines for adults in Ireland is to take 30 minutes of exercise daily and 60 minutes for children, ideally in 10-minute burst.

In direct response to this, SuperValu has developed a programme built around ten-minute bursts of exercise including a series of Take Ten fitness videos featuring the stars of GAA, which will be designed to showcase a range of exercises and games which will encourage families to undertake more exercise together. The videos will be released throughout the summer months across the Football Championship.

SuperValu stores  kicked off nationwide on Thursday 10th  a nine-week programme which will see individual retailers donate 55,000 GAA footballs to clubs across the country. Through the initiative, SuperValu customers will receive ‘#BehindTheBall’ tokens, which they can then use to allocate to a local GAA club of their choice at the in-store collection points.

Commenting at the launch, Des O’Mahony, SuperValu Marketing Director, said, “We work tirelessly to ensure that our GAA partnership has a direct impact on our local communities, enabling us to become a genuine force for building healthier communities in Ireland. This year, we aim to inspire the nation to get Behind the Ball and spend more time exercising together as a family. This year we will be enabling this further by giving away a further 55,000 balls to children around the country bringing it to a total of 110,000 by the end of 2018 - the largest ball giveaway in the history of the state”