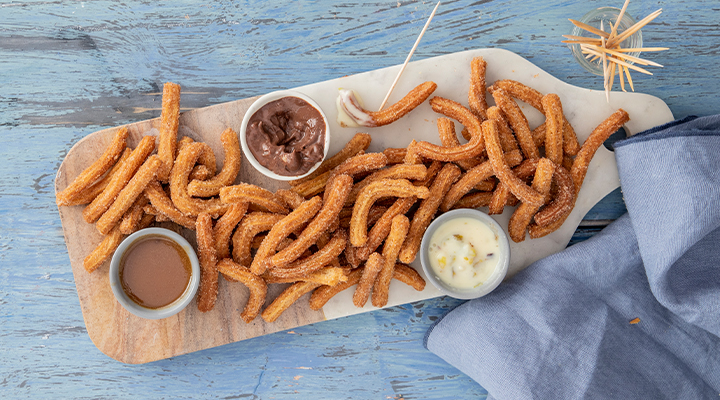 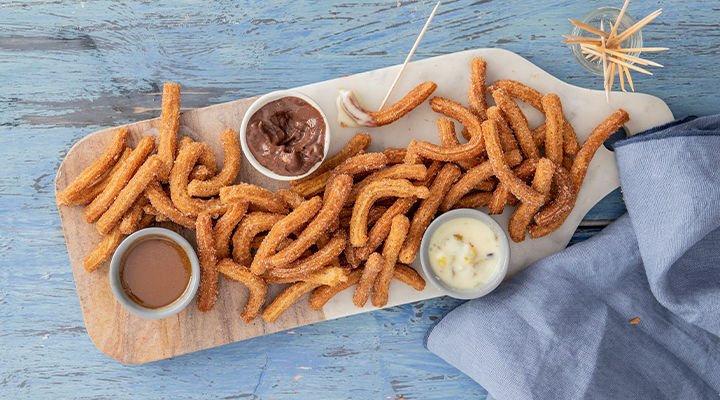 These are smaller, crispier versions of the traditional Spanish favourite.

For the chocolate hazelnut sauce

For the coconut caramel

For the white chocolate pistachio sauce

To make the churros, place the water and butter in a saucepan set over a low heat until the butter has melted. Take the pan off the heat and add the flour, baking powder and salt. Stir with a wooden spoon until well incorporated, then allow to cool for 10 minutes.

To make the coconut caramel, place the coconut milk and brown sugar in a small saucepan set over a medium heat. Bring to the boil while gently stirring continuously. Once the mix comes to the boil, turn down the heat and allow to simmer gently for 10 to 15 minutes, until the mixture has become a smooth caramel. Remove from the heat and set aside. To finish the churros, spoon the mixture into a piping bag fitted with a mini star nozzle attachment. Mix the sugar and cinnamon together in a bowl. Line a baking tray with kitchen paper and set aside.

Pour the oil into a small heavybased saucepan set over a medium heat and bring up to 180°C. To test if the oil is hot enough, drop a small piece of bread into the oil. If it turns golden brown within 50 to 60 seconds, the oil is ready to use. Always be careful when using hot oil. Don’t let the oil get too hot and never leave it unattended. Once the oil is hot enough, pipe the churros about the length of your index finger, using a scissors to cut each churro off under the piping nozzle and allowing it to fall gently into the oil. Work in batches of four or five churros at a time so that you don’t overcrowd the pan and make the temperature of the oil drop too much, making sure you flip them over to cook both sides. Once the churros are cooked to a golden brown colour, remove them with a slotted spoon and place on the lined tray to absorb any excess oil, then toss them in the cinnamon sugar. Repeat with the remaining mixture.

To serve, place the churros on a board with all three sauces in separate bowls for dipping.