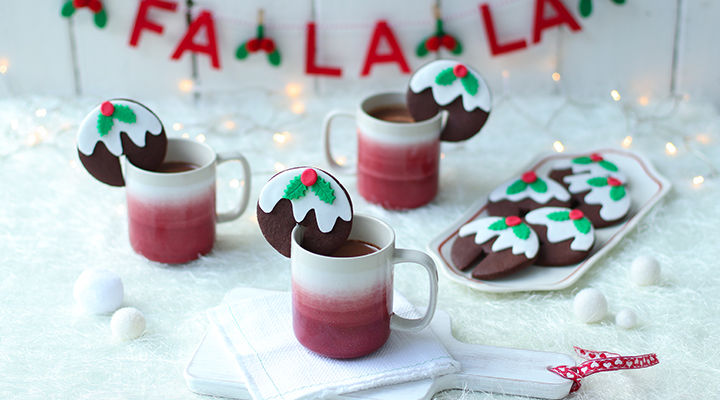 These cute Christmas pudding-shaped cookies are sure to be a hit this Christmas, especially when presented on the side of a mug of hot chocolate! These would make ideal edible gifts to share with friends and kids will have a great time making, decorating and packaging them up.

Beat the sugar, butter and egg in an electric mixer until well combined. Sift in both flours and the cocoa. Beat lightly together until combined into a smooth dough ball.

Roll the dough out between two sheets of parchment paper until it’s about 5mm thick. Slide onto a baking tray and chill in the fridge for about 30 minutes, until firm. Preheat the oven to 180°C/gas mark 4. Line two large baking sheets with non-stick baking paper. Using a 7.5cm round, straight-sided cutter, stamp out 24 discs, re-rolling the dough as necessary. Arrange them spaced apart on the baking sheets as you go. Using a small, sharp knife, cut out a 3cm long x 1cm wide piece inwards from the edge of each cookie. This will be the gap that allows the cookie to slot onto the side of a mug. Bake in the oven for 10 to 12 minutes, until just firm to the touch. Remove and transfer to a wire rack to cool completely.

Once cool, it’s time to decorate. Roll the white fondant icing out between two sheets of parchment paper until it’s about 2mm thick. Using the same 7.5cm round, straight-sided cutter that you used earlier, stamp out a half moon shape from the edge. Using the point of a small, sharp knife, shape the outside edge of the cut-out into a snowy effect. Brush a little edible glue on the cookie on the half opposite the cut-out. Place the white icing there to stick, curved side to curved side. Repeat to give 24 in total, re-rolling the icing as necessary.

Next, roll the green icing in the same way. Using a holly leaf cutter or the tip of a small, sharp knife, cut out a pair of leaves. Dab the backs with a little edible glue and place them on top of the white icing to further resemble a Christmas pudding. Repeat with the remaining green fondant, re-rolling as necessary.

Finally, shape the red icing into 24 small balls and flatten them slightly. Dab the backs lightly with edible glue and press them onto the cookies in between the holly leaves. Leave to dry out for at least 8 hours or overnight before serving.

Garlic and Herb Chicken with Oven-Roasted Corn on the Cob