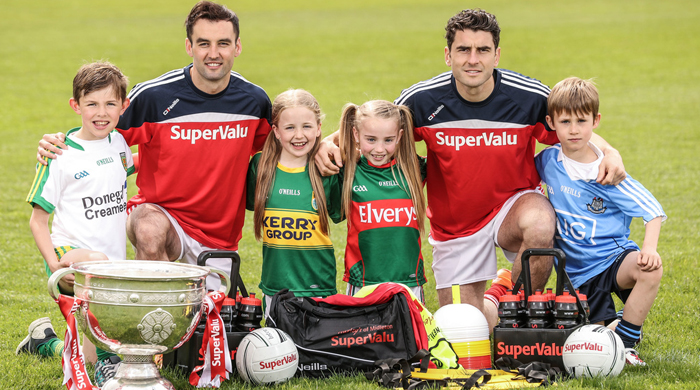 At SuperValu, ‘We Believe in Local’ and nothing represents local more than the GAA, with its strong heritage and deep roots in every community across Ireland. In 2016, SuperValu helped inspire future generations. Through our kits for kids initiative, local SuperValu retailers across the country awarded juvenile O’Neills training kits to over 370 clubs, worth €250,000 collectively.

Taking place in over 130SuperValu stores nationwide shoppers will receive Kit for Kids tokens which can be donated to their chosen club at in-store collection points.

With no less than three All-Irelands and four All-Stars under his belt, Bernard Brogan understands the importance of giving back to the next generation of GAA stars. Playing with St Oliver Plunketts for over two decades, Brogan knows just how valuable new equipment is to club members and to the club’s development. Bernard is urging shoppers to support their local GAA club by getting behind SuperValu’s new initiative.

Commenting at the launch, Brogan said, “I’m delighted to once again support SuperValu’s Kit for Kids initiative as I know myself just how important gear like this is to any club. My nephew Jamie, and the rest of the kids in my club St Oliver Plunketts, would be delighted to get their hands on such great O’Neill’s kit. So get down to your local SuperValu and support your local GAA club. Whether you’re a member of a GAA club or not this is a really positive way to give back to the youth in your local community.”