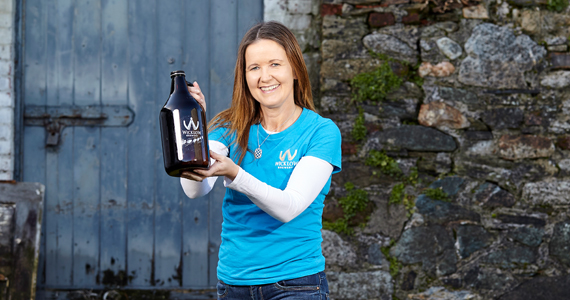 Wicklow Brewery was set up in 2014 as a result of the increasing demand for Craft Beer in Ireland and lack of suppliers at that time. Leigh & Ashley Williams who are also co-owners of the popular Mickey Finn’s Pub became aware of this growth market and were unable to source any craft beer for their own venue. After much research, they decided to build their own Brewery and produce beers on-site adjacent to Mickey Finn’s Pub. These beers would be sold on and off site, initially in keg format to the local hospitality venues.

Four years on and with major International Awards under our belt we are now canning and bottling and going nationwide with our beers. Our beers are on tap in over 50 venues and available in most hotels in Co Wicklow along with numerous off sales establishments.

With increased demand, we have purchased extra tanks which will double our capacity and we are very excited about the future of the ‘Wicklow Brewery’.

We are producing genuine craft beer, which is brewed and canned in the Brewery on-site in Redcross. We use our own well water and zero chemicals, brewing in small batches to enhance taste and character. Consumers can take a sensory trip to Wicklow Brewery, where they can take a Brewery Tour and afterwards indulge in some Food & Beer Pairing whilst aromas of fresh beer being brewed surround them as they Brewers work alongside them.

After much thought, we choose SuperValu above the other Supermarkets to stock our beer as we felt it was a better match for our locally produced product. The Food Academy Programme is a great opportunity for us to get our brand out there. We are already stocked in our local SuperValu’s and have a designated Account Manager Aoife Collier, who liaises with shop managers individually. Together they organise regular tasting which always enhances sales.