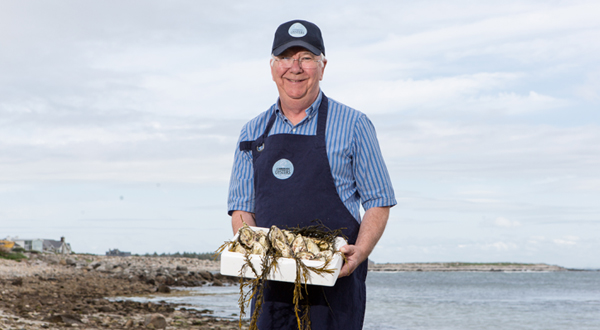 Huitre Du Connemara Ltd T/A DK Connemara Oysters was specifically formed to acquire the oyster farm licence at Ballinakill Bay Dawros Letterfrack Co Galway. The farm dates back to 1893 and is one of the oldest licenced farms in the country. Dawros is a peninsula situated at the base of Connemara National Park. It is surrounded by the Connemara Mountains on land side and by the Atlantic Ocean.

Native oysters were farmed and exported throughout the late 1800’s early 1900’s prior to the state being formed and exported to the UK. There were several owners through out the 1900’s and more recently the farm had fallen into disrepair. We took over the farm in the 2014 and spent the last four years recommissioning it. Oysters are like wine and take their taste from the bay they are grown in. The rivers and streams flowing into the bay bring the same nutrients that influence the famous Connemara lamb. These combined with the fresh waters of the Atlantic giver our Connemara Oyster its unique flavour. All of our Oysters are purified using depurated water from the bay they are grown in, thus protecting the integrity of their flavour. It takes three years to grow an oyster and we are bringing our first crop to market.

You can have the best product in the world but if people don’t know about it you will never have a sustainable business. SuperValu is helping us by making our premium product available to their discerning customers

Connemara is a beautiful region and not only has its own micro climate but its local economy is hugely influenced by the tourist industry. Like all local business we contribute to the local economy by providing employment, by using service providers local to the area, and through our Oyster Farm Tour “Seed to Plate” we attract tourists to the region. All our employees live locally within a two mile radius of the farm.