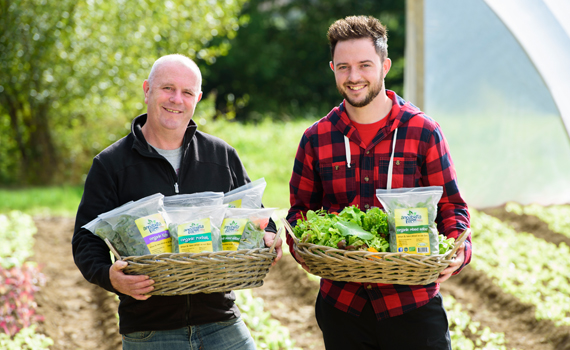 Malachy Downey established Annabella Farm in 2012. The farm is located at Annabella on the outskirts of Mallow town. He began to grow a variety of seasonal vegetables, which were chemical and pesticide free, for local restaurants and farmers markets.

At this time his son Rory started working with Malachy. They constructed two large polly tunnels which enabled them to grow in larger quantities and supply their customers all year round. Since they have expanded the business, they have focused their production on leaf plants such as mixed leaf salad, kale, spinach and rocket. These products have proved to be very popular with their local customers. In the summer of 2017, Annabella Farm achieved organic status and also expanded their production further with a new polly tunnel.

Annabella Farm owes a lot of their success to Dano’s Supervalu Mallow for providing them with a market place and invaluable advice and guidance in their start-up phase and continue to have a great relationship with the store today.