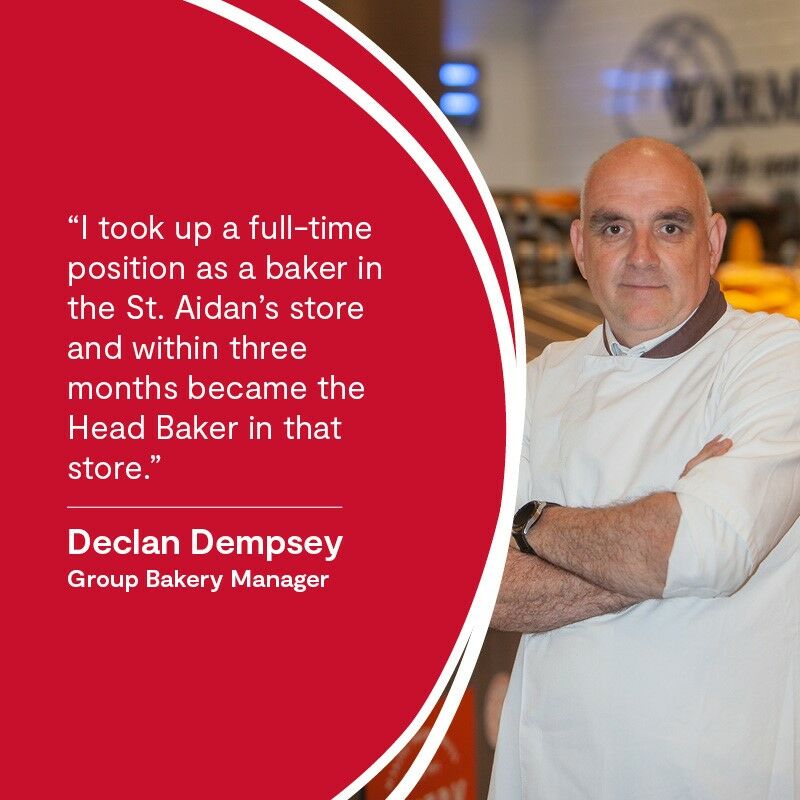 I began my career in retail seven years ago. Before this time I had worked in a factory, in construction and owned my own business.  In 2010 due to the economic crash I found myself without a business and a job. I needed to diversify and took up a cookery course for ten weeks in the interim as I liked to cook.  This began my love affair for cooking and, in particular, baking.

I went onto complete a three-year degree programme in DIT (now TU Dublin) at 40 years old.  I had a tough time at school and never really understood why.  It was when I was at college that I finally went and did something about it and I was then diagnosed with dyslexia.  The college really understood what was required from me, how to support me and how to enable me to learn and develop with dyslexia.  So much so that I was awarded Student of the Year and won a scholarship to Belgium, Germany and Poland.

During my last year in college I opened up my own part-time business on Saturdays and Sundays in Wexford, making fresh bread and pastries.  My plan being when I finished college I would take on the business full-time. I did this up to seven years ago and was about to renew the lease on the business when I met a retailer while shopping in Pettitt's St Aidan's in Wexford and there began the next chapter in my career.

I took up a full-time position as a baker in the St Aidan's store and within three months became the Head Baker in that store.  When I became the Head Baker there were five staff working in the department and now there are 24.  The sales targets that were set to be achieved over five years were achieved in the first six weeks of the new bakery department opening in St Aidan's.

I supported the opening of one new store in the Pettitt's group, five years ago, and two new bakery departments in two other stores. I was then appointed to Group Bakery Manager three years ago and worked between the group role and my role in St Aidan's while they recruited a Head Baker to replace me.  In this role I was responsible for the six stores in the group.  I played a huge part in the opening of the Bray store which is Pettitt's flagship store.  I now manage a big sales turnover, KPIs, innovation and growing sales.  My biggest responsibility is leading the teams in the group.  I am passionate about the product but equally as passionate about emerging talent.  My work ethic is work hard, fail fast, be fair, listen and communicate. I am constantly working on new projects to increase efficiencies, productivity and consistency between all stores in the group.

I have participated in several development programmes at SuperValu, specifically on leadership, managing teams and building my self-awareness.  However, I have also learnt so many skills through my mentors.  Coaching is something that I do well, but also something that was done with me.  During my formal training I learnt so much about leadership skills and began to be able to identify those skills in the people who influenced me in my career.  I was once told I was resilient.  To me, it was what I had to do to ensure I looked after my family.  My life skills cannot compare with anything else. I was lucky they were the right life skills, not everyone is as lucky.  I urge young people who are struggling with learning to go and get help.  It makes a huge difference, and I am proof of that.