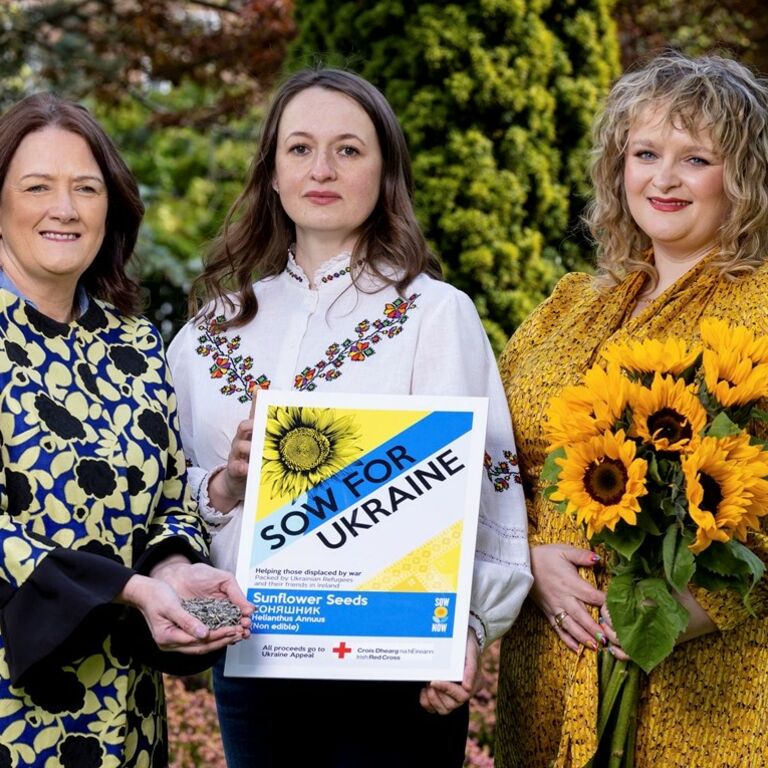 After starting as a small sunflower seed fundraiser for Ukraine from a kitchen table in Tullow, Co. Carlow, the Sow Now initiative has now gone national. The Sow Now Sunflower Seed initiative was created by a Ukrainian woman  Tetiana Pankiv and her host Jacqui McNabb with the aim to raise €300,000 for the Irish Red Cross Ukrainian Crisis Appeal while also offering Irish people the opportunity to visually show their solidarity by planting sunflowers, the national flower of Ukraine, across the country this summer.

This amazing initiative all started when Tetiana Pankiv (39) and her three daughters Sofia (16), Marta (15) and Yana (5) fled their beloved home Lviv in Western Ukraine. Arriving in Ireland, she was extremely grateful to have gotten her children to safety and for the immense support she received from the Tullow Friends of Ukraine. However, Tetiana like so many other Ukrainian refugees suffered a huge sense of guilt and helplessness having left those she loved behind in a war-torn country, describing it as “hell on earth”. Tetiana desperately wanted her family to know she had not forgotten them, and she would do whatever she could to help them.

Tetiana’s host Jacqui Mc Nabb was so inspired by her strength and determination to do more for those who remain in Ukraine that she helped her to set up the Sow Now Sunflower seed initiative. Tetiana and Jacqui’s intention is to have sunflowers bloom in every village, every home, and every business across the country as a powerful symbol of Ireland’s support for the Ukrainian people.

With incredible support from many entrepreneurs and volunteers, Tetiana and other Ukrainian women have sourced and packed 100,000 packets of sunflower seeds. The sunflower seeds will go on sale from Friday, April 29th at €5 per packet and will be available in SuperValu and Centra stores as well as independent retailers across the country. By placing an order for thousands of sunflower seeds to be distributed across 600 stores nationwide, SuperValu and Centra helped to make this small campaign go national.

By donating and then sowing the Sow Now sunflower seeds Irish people will be part of a #sownow movement that will create a big impact by through many individual acts. The sunflowers will be a small reminder of home for the Ukrainian people as well as friendship and support to the many women and children who find themselves in Ireland seeking refuge.

Charlie Lamson, Head of Fundraising with the Irish Red Cross said; “This is an incredible initiative in support of the Irish Red Cross Ukraine Crisis Appeal – and is another example of the profound empathy and support that people throughout Ireland have shown for the millions of Ukrainians whose lives have been so profoundly impacted by the ongoing conflict.  The Irish Red Cross is proud to be a part of the International Red Cross Movement to be in a position to provide aid in Ukraine, the surrounding countries and here in Ireland.”

Ian Allen, Managing Director of SuperValu and Centra said: “Our colleagues, retail partners and customers at SuperValu and Centra have been devastated by the war in Ukraine and we want to help in any way we can. In recent weeks, Musgrave Group, together with its retail partners, colleagues, and shoppers, has donated over €1 million worth of funds and goods to support the Ukrainian people. The new campaign will further add to that, and we are encouraging all of our customers in SuperValu and Centra to buy sunflower seeds. We aim to see sunflowers popping up all around Ireland this summer as a symbol of our support for Ukraine. We have been so inspired by Tetiana and her family, and our thoughts are with them and all of the Ukrainian people. We hope for a peaceful end to this war soon.”

Shoppers will be able to pick up a packet of sunflower seeds in their local SuperValu or Centra and some independent outlets from Friday, April 29th with all proceeds going directly to the Irish Red Cross Ukrainian Crisis Appeal. When planting their seeds, people are encouraged to share their images on social media with the hashtag #SowNowforUkraine.