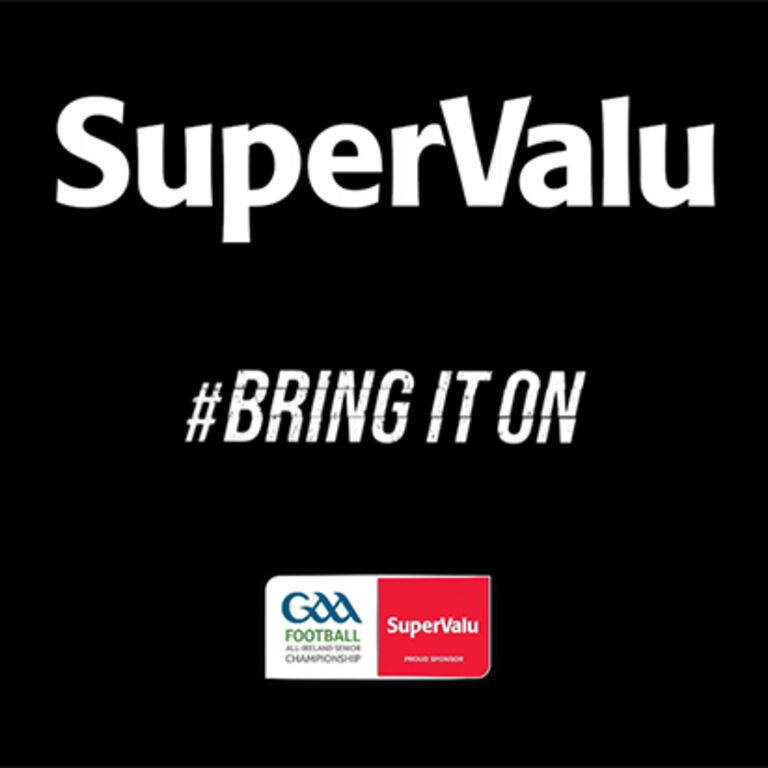 SuperValu and the GAA announce ‘Bring It On’ campaign

SuperValu, together with the GAA, announce their commitment to increase participation in GAA sports among people from diverse backgrounds by 30% by 2025

21 June 2021, Dublin: New research published today for the launch of SuperValu’s ‘Bring It On’ GAA campaign, has found that 65% of respondents believe that diversity and inclusion in the GAA will have benefits for the wider community.

As part of the launch SuperValu, together with the GAA, is announcing their commitment to increasing participation among people from diverse backgrounds in GAA sports by 30% by 2025.

The research, which was carried out by Amarach Research on behalf of SuperValu, also showed;

SuperValu also commissioned its own customer research for insights on this campaign and found that 99% of us believe that a diverse society is a better society.

While respondents believe in the benefits of greater diversity and inclusion, the main barriers cited stopping members of diverse groups from getting involved in sports is perceived to be prejudice and/or discrimination.

Sandra Healy, CEO of Inclusio, Founder of the Centre of Excellence for Diversity and Inclusion at Dublin City University, said: “The research findings show that Irish people believe overwhelmingly that a diverse society is a better society. As citizens we all have a role to play in ensuring that we are all working towards full inclusion in all of our communities and breaking down any barriers that may exist. Our society benefits hugely from diversity and this campaign encourages all of us to come together and make full inclusion a reality.”

Speaking at the launch of SuperValu’s ‘Bring It On’ campaign, SuperValu Marketing Director, Ray Kelly, said: “Today marks SuperValu’s 12th year of sponsoring the All-Ireland Senior Football Championship, a long-standing partnership which we are incredibly proud of. At SuperValu, we believe in community and in making communities better places and for us community means including everyone. As a society we have come a long way when it comes to diversity and inclusion however there is still a way to go. Our research shows that 65% of respondents believe if the local GAA club is more diverse and inclusive it will also improve diversity and inclusivity within communities. Today’s research also highlights the importance of role models with 47% telling us that we are lacking role models from diverse communities in GAA. We want to use our position as a leader in the community to start this conversation and use our position to support and encourage inclusive communities. We are investing over €1m in the ‘Bring It On’ campaign across TV, radio, billboards, bus shelters, digital and social media to drive the conversations, awareness and understanding. We believe in the power of community and our partnership with the GAA offers us a great opportunity to make our communities fuller, more diverse and more inclusive places.”

Ger McTavish, GAA Diversity and Inclusion Officer: “We are delighted to be working with SuperValu once again and that they are using their sponsorship of the GAA and national reach to highlight the importance of diversity and inclusion. In the past number of years, we have been committed to enhancing diversity and inclusion within the GAA at all levels and we are committed to keeping this momentum going. In recent years we’ve seen the success of campaigns to increase female participation in our games and we are delighted to be doing the same across Ireland’s diverse population, to promoting sport and physical activity to everyone regardless of age, sexual orientation, ability, ethnicity, nationality, or fitness level by committing to increasing GAA participation by 30% among diverse groups.”

At the launch event, SuperValu also unveiled its new TV advertisement which includes a number of ambassadors who shared their own positive experiences of inclusivity in the GAA:

As well as the first official airing of the TV ad, the webinar heard from a number of speakers on the importance of diversity and inclusion in the GAA and wider society including:

Commenting further on SuperValu’s own journey with diversity and inclusion, Ray Kelly said: “As an organisation we are seeking to make diversity and inclusivity central to how we do good business. To do this we have a number of policies, practices and initiatives in place to ensure that as an employer we make space for all perspectives and points of view as we continue on our journey of inclusivity. We are part of the 99% of us who believe a diverse society is a better society, and we want our workplaces, stores and our communities to represent this diversity”.