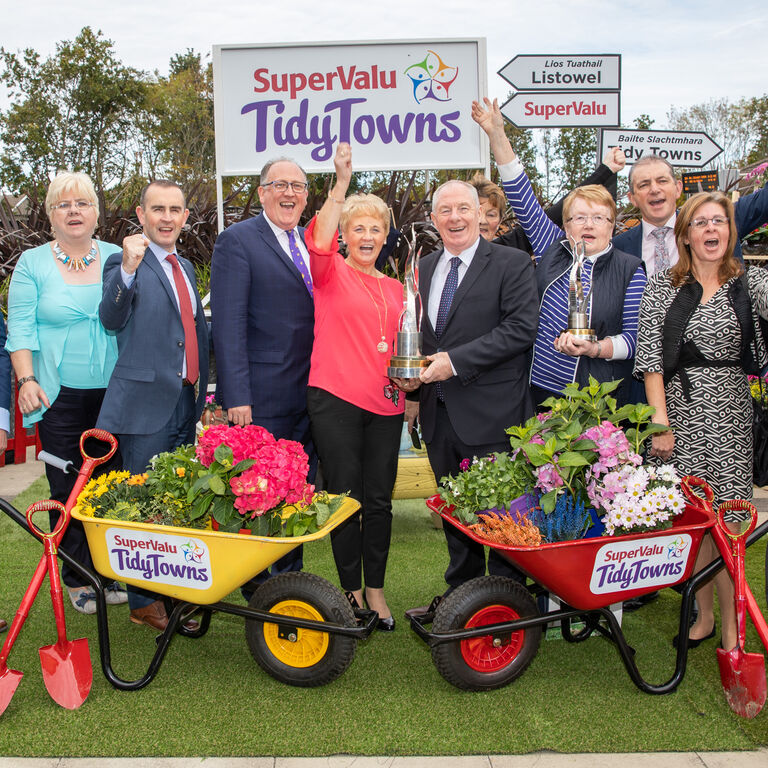 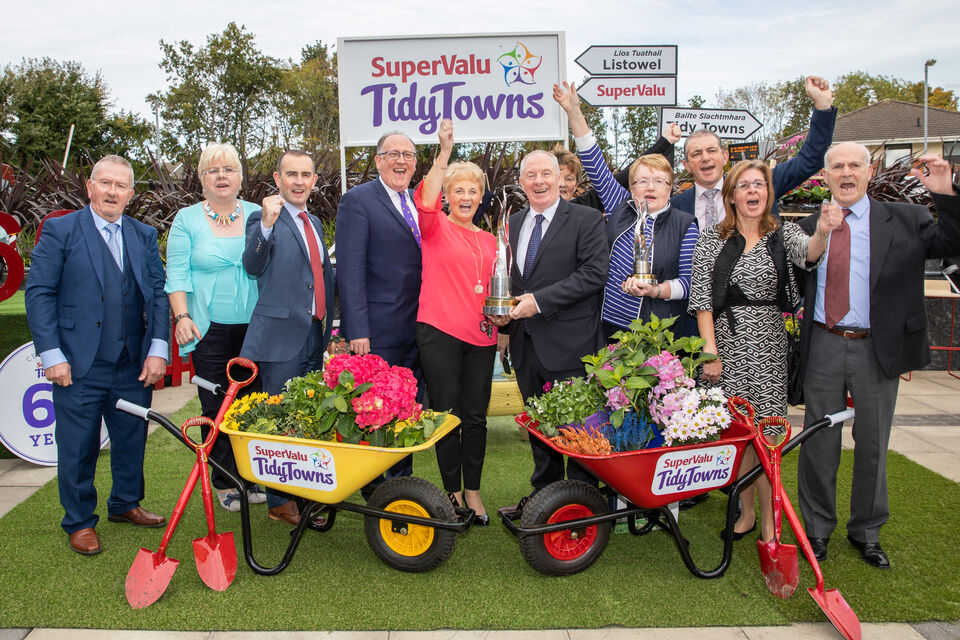 LISTOWEL IS IRELAND’S TIDIEST TOWN FOR 2018

Listowel, Co. Kerry was today (24th September) named as Ireland’s Tidiest Town for 2018.  In this, the 60th Anniversary year of the TidyTowns competition, Listowel was best of a record number of 883 entries from towns and villages throughout the country in the SuperValu National TidyTowns competition.  The announcement was greeted with great jubilation at today’s awards ceremony at The Helix in Dublin.

On hand to present the prizes was Mr. Michael Ring, T.D., Minister for Rural and Community Development and Mr. Martin Kelleher, Managing Director of SuperValu, the competition’s sponsor for the 27th year.  The Helix was packed with representatives of TidyTowns groups from all over the country, eagerly awaiting the announcement of the winners.

Speaking after the awards ceremony, Minister Ring said: “This is a fantastic achievement for Listowel who are very deserving winners.  Listowel is one of a small number of centres who have consistently entered the competition since its launch in 1958 and in the intervening years have worked steadfastly on improving their position in the SuperValu TidyTowns competition.  Today, all that dedication and effort has paid off.

I also want to congratulate all of the other prize-winners announced today.  The work of all those involved in the TidyTowns effort results in the attractive and welcoming towns and villages we see all over the country.  The voluntary work that people put in to their communities brings great pride, a great sense of achievement and great camaraderie to those communities. That is why this competition has flourished for 60 years.

Minister Ring also announced a special allocation of €1.4 million to support the work of individual Tidy Towns Committees around the country in order to mark the 60th anniversary of the event.

The Minister said: “On the occasion of the 60th anniversary of the competition, I am making available €1.4 million from the Government in order to directly support the Tidy Towns groups that bring out the best in our towns and villages. I have no doubt that towns and villages across the country will benefit hugely from this investment. Wherever you have active Tidy Towns committees, it gives the place a real boost and creates the environment for tourism.”

The Minister also thanked SuperValu, the competition’s sponsor. He said: “I want to pay tribute to SuperValu, who are now in their 27th year as sponsor and have worked with us to grow the competition. It is getting stronger every year with increased participation, an increased number of awards and a notable increase in the efforts of the communities involved.

Supervalu have shown fantastic support for the competition, not only through their financial sponsorship but also through the support provided to local TidyTowns groups by their network of local retailers.”

Martin Kelleher, Managing Director, SuperValu said: “I would like to congratulate Listowel for being named Ireland’s Tidiest Town 2018. The commitment, dedication and passion of the Listowel SuperValu TidyTowns committee is remarkable, and I would also like to commend the support that they received from Listowel SuperValu to win the overall award.

I would also like to congratulate the category winners who received awards this year as we mark the 60th anniversary of the competition - your limitless energy and hard work really shone through.

It goes to show that SuperValu TidyTowns is a unique initiative, there is no other competition like it in the rest of Europe, thanks to the commitment of volunteers, committees and SuperValu retailers.

The competition has had a huge benefit across Ireland for the past 60 years, and this year was no exception, with SuperValu TidyTowns committees building greenways, eradicating plastic straw use and delivering heritage projects, while bringing people from all ages and backgrounds together to build thriving, sustainable communities.

SuperValu is committed to building thriving, sustainable communities across the country and SuperValu TidyTowns is one of the best ways for us to achieve this.  We are delighted to have been involved in the TidyTowns competition for the past 27 years and look forward to continuing to work with communities in the coming years. “

The SuperValu TidyTowns competition is organised by the Department of Rural and Community Development and sponsored by SuperValu who have sponsored the competition since 1992.