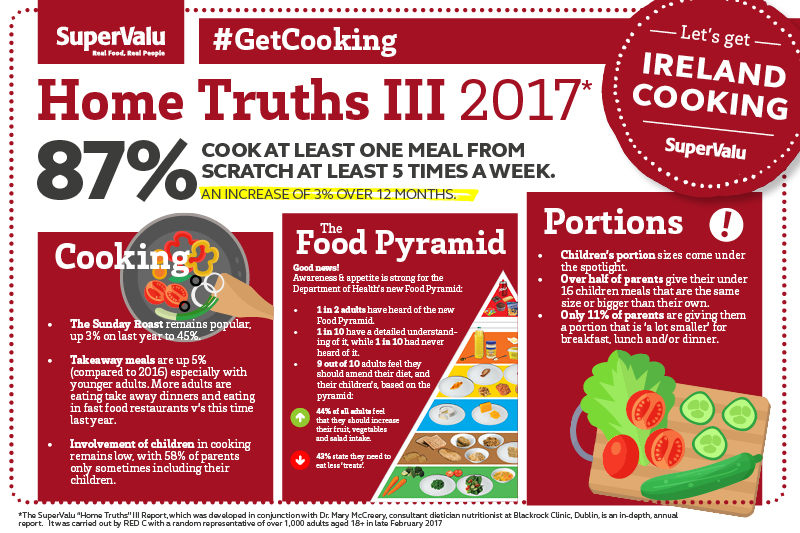 The third annual SuperValu Home Truths Report released today shows a shift in attitudes to cooking from scratch and a great appetite for food inspiration; with increases in people cooking more from scratch and Sunday roasts still high on the weekly menu and family get togethers.

Time, lack of cooking skills and inspiration have been cited as the main impediments since our first report three years ago, but there is clear evidence now that the dial is moving in the right direction. Surprisingly while low, 13% still believe it is “too expensive to cook from scratch”, despite clear evidence that cooking meals from fresh quality ingredients from scratch is better value than the more expensive options (like ordering takeaways) and undoubtedly healthier.

The SuperValu “Home Truths” III Report, which was developed in conjunction with Dr. Mary McCreery, consultant dietician nutritionist at Blackrock Clinic, Dublin, is an in-depth, annual report.   It was carried out by RED C with a random representative of over 1,000 adults aged 18+ in late February 2017.

There has also been a discernible shift in attitudes towards scratch cooking, with adults offering fewer excuses than before.  Last year, nearly half of all 18-24-year old’s (49%) admitted they didn’t cook from scratch because they were lazy, today only 37% say that’s the case. Lack of inspiration is becoming less of an excuse too, as people are becoming more inspired about cooking, only 12% now feel it’s an excuse compared to 19% last year.

But take-aways aren’t going away; the report shows an increase in take-away meals and visits to fast food restaurant both up 5% a week, compared to last year.

Awareness of, and views on, the new Food Pyramid

Half of adults are aware of the Dept. of Health’s new Food Pyramid (rising to 63% of AB’s and 60% of women aged 25-44) and, while 1 in 10 has a detailed understanding of it, another 1 in 10 had never heard of it.    Almost 9 out of 10 adults feel they should make “any changes” having seen the food pyramid, most saying they need to eat more fruit and vegetables and cut back on treats, both in their own and their children’s diets.

People are getting together more as a family around meal times - more than 2 in 5 (45%) have a weekly Sunday Roast, up 3% while there is also a rise in those having a family meal on a weekly basis, up 8 per cent on 12 months ago, 94% of those with dependent children will regularly have a family meal, up 5% and 77% of older adults (aged 65+) have Sunday Roasts regularly, up 24% on last year.

Commenting on the results of the Home Truths III report, Martin Kelleher, Managing Director at SuperValu said today: “It’s really heartening to see the results of our third Home Truths Report demonstrating that the work we have been doing over the past two years in providing inspiration and creating an awareness of the benefits of cooking from scratch has made a difference. I am encouraged that the dial has shifted and shoppers are trying to cook more at home. They understand that eating good wholesome food is good for their health and a super way of the family connecting together over mealtimes.”

He continued: “It’s important to ensure the next generation is healthier than the last and that’s why at SuperValu we are on a mission to Get Ireland Cooking; three years ago, we called on everyone to cook just one more meal from scratch at home every week – and they are now doing that.   With Let’s Get Ireland cooking we have been all around Ireland, providing food inspiration ideas, simple advice on cooking skills, and with our ambassadors showing people how to cook simple, healthy meals.     We know that lack of cooking skills is a real impediment, especially for the younger generation and we want to address that.

Martin added: “The new Food Pyramid provides everyone with pause for thought –an opportunity to reassess the changes needed in everyone’s diet – and their children’s – to ensure they have a balanced, healthy diet.    Getting children involved in cooking and being mindful of their portion sizes will help demystify the pyramid and make it something everyone in the family can get behind, by setting personal targets and goals, for example.

Commenting on the SuperValu “Home Truths II” Report, Dr. Mary McCreery, said today: “It’s really encouraging to see more people cooking good, wholesome food from scratch and that time isn’t such a barrier, as people become more equipped in their cooking skills and routines. Planning meals in advance and buying fresh food not only benefits your health; it also is less expensive than any of the other, less healthy options.

Mary continued: “The new food pyramid gives everyone an opportunity to see what elements of their diet need to change, to ensure that they are getting the right balance of all nutrients, in the right proportion and size, for optimum physical and mental health.

On the back of the Home Truths Report III released today, SuperValu has launched “Let’s get Ireland Cooking” which is a continuation of its campaign to ensure wholesome, delicious food is central to the health and wellness of the next generation & by providing a greater understanding of what really constitutes nutritious healthy meals. Central to the campaign is Ireland’s new food pyramid, simple messages that everyone can take on board to achieve a more balanced diet. SuperValu also unveiled their new Let’s Get Ireland Cooking ambassador line up today – Kevin Dundon, Martin Shanahan, Sharon Hearne Smith, The Happy Pear, Michael O’Meara, Bressie and blogger, Mummy Cooks.