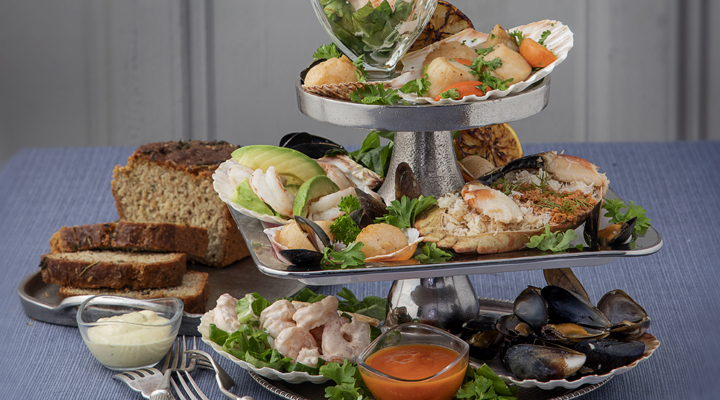 How amazing does this Seafood Tower look? We want to try it all. Why not give it a try at your next dinner party or as a standout starter on Christmas day.

For the Brown Bread

For the horseradish tomato sauce

For the spiced mayo

Preheat the oven to 180°C/gas mark 4. To make the horseradish tomato sauce, place the whole tomatoes on a baking tray, drizzle with a little oil and season with a grind of salt, then roast in the oven for 20 minutes. Remove from the oven and allow to cool. Blitz the roasted tomatoes with the horseradish, honey and Tabasco. Taste the sauce and add a couple of grinds of salt and a squeeze of lemon to taste. Transfer to a small serving bowl and chill in the fridge until needed.

To make the brown bread, mix the buttermilk, fennel seeds and thyme leaves with the brown bread mix and bake according to the packet instructions. Remove from the oven and wrap in a clean tea towel to cool for at least 20 minutes, then cut into slices.

Whisk the mayonnaise with the garlic, turmeric and cumin. Add a squeeze of lemon to taste. Transfer to a small serving bowl and dust with a little extra turmeric on top, then chill in the fridge until needed. To cook the scallops, cut one lemon in half. (Cut the remaining lemon into quarters for using later). Heat 1 tablespoon of oil in a non-stick frying pan set over a medium heat, then add the lemon halves and cook for 2 minutes, until browned. Remove the lemon halves from the pan, then add the scallops and cook for 1 to 2 minutes on each side, seasoning with a grind of salt. Cook the mussels according to the packet instructions.

Slice the avocado, then squeeze over a lemon wedge and season with a grind of salt.

To assemble the tower, arrange the two sauces, avocado slices, dressed crab, prawn cocktail and the cooked mussels and scallops on a cake stand. Garnish with fresh parsley and the charred lemon halves and serve with the sliced freshly baked brown bread.