How to Make Glazed Ham with Brown Sugar, Chilli and Mustard 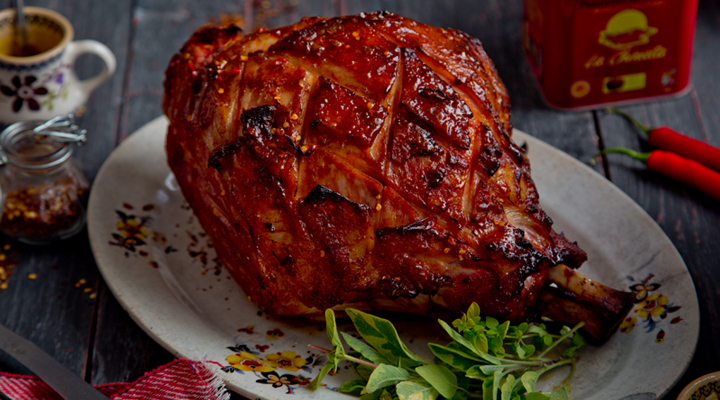 Use the cooking liquor from the ham to cook lentils, adding rooster potatoes to soak up some of the salt.

1. Place the ham in a large heavy-based saucepan. Add the orange, onion, carrot, bay leaf and enough cold water to cover the ham completely. Bring to the boil, then reduce the heat and allow to simmer for 3 hours 20 minutes to 4 hours 10 minutes for a 5kg ham. Remove from the heat and allow the ham to cool in its cooking liquor.

4. Remove the ham from the cooking liquor. Using a sharp knife, carefully remove the skin from the ham, then
score the fat in a criss-cross diamond pattern. Spread the glaze over the top of the ham with a spoon.

5. Place the ham on a baking tray and bake in the oven for 15 to 20 minutes, until the glaze is golden brown. Remove from the oven and rest for 20 minutes, loosely covered in a foil tent, before carving. Serve warm or cold.