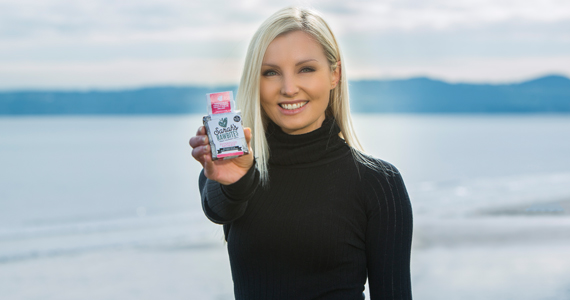 I began my journey with Sarah’s Rawbites during the summer of 2013. I was looking for cleaner more natural versions of treats I was already in love with making and eating! I’m a Pastry Chef by trade so recipe development was already something I was accustomed to doing, I wanted cleaner healthier versions of treats that I was already fond of and began researching raw and wholefood based recipes and their benefits, and then put what I had learnt to the test! I began producing from home and was supplying Póg and The Howth Market Deli. A few months passed and in May of 2014 I emailed Avoca on the off chance that they may be hiring staff for their Avoca kitchen in Malahide Castle. I stated that I was looking for a 4 day week to take the first step into putting more time into growing my own little business. In August 2014 I went for my interview with their Malahide Castle Head Chef, and the next month I joined their team. I was asked to create a few of my products for ‘Specials’ in Avoca and they sold so unbelievably well that I went on to create a full range of my products for them. By that December I was working full time for Avoca producing my own products for them and supplying all their shops and cafes throughout Ireland. I loved every minute of working for Avoca and considered putting aside hopes of starting my own business to stay working for Avoca. But by summer 2015 the want to go out on my own came back even stronger and by the end of August 2015 I had handed my resignation in to a job I loved so much and secured my own kitchen to rent in my local GAA Club. By September 2015 I took the jump and began working for myself taking Avoca with me as my first big customer. I produce out of the Portmarnock Gaa Club (Naomh Mearnog), the kitchen is small but works so well for me.