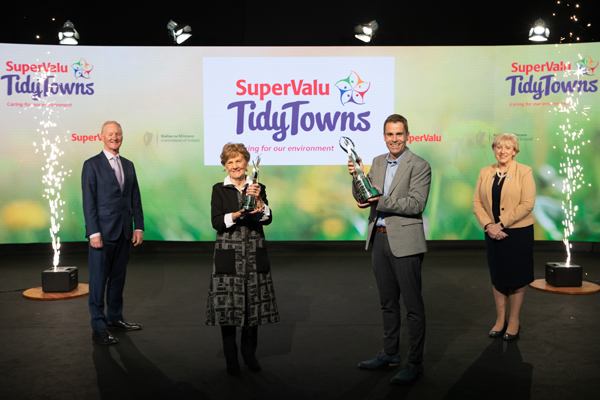 The announcement was made at a scaled-back event held in the RDS today with a small number of representatives present from this year’s entries to the Competition.

The event was streamed live to thousands of TidyTowns volunteers around the country who were eagerly awaiting the announcement of the winners.

The SuperValu TidyTowns competition has been in existence since 1958 and Ennis, was judged to be the best from a number of 847 entries to the competition this year.

The announcement was greeted with much celebration and excitement at today’s awards ceremony at The RDS in Dublin.

On hand to announce the results of the 2021 competition with Minister Humphreys, T.D., was Mr. Ray Kelly, Marketing Director of SuperValu, the competition’s sponsor for the 30th year.

Some of the other big winners on the day included:

“This is a fantastic achievement for Ennis who are very deserving winners.  Ennis first entered the SuperValu TidyTowns competition in 1959 and continue to showcase all that is good about community and volunteerism. They have been consistently achieving high standards in the competition at local, regional, national and European level and won the competition previously in 2005. Given the tremendous interest in the competition and the increasing efforts made by all entrants, it is a wonderful achievement to take the national title for a second time; this really demonstrates that resilience and determination do reap rewards.

“I want to congratulate Ennis and all of the other deserving prize-winners announced today.  It has not been easy for TidyTowns groups during what has been an unprecedented period.

“Like all sections of society, the pandemic has prohibited us from participating in the things we enjoy within our own communities.

“I want to commend the hundreds of groups and thousands of volunteers who, in the face of adversity, put their community first and continued to make their areas better places to live and work and to visit, all the while, adhering to social distancing and public health guidelines.

“For that, on my own behalf and that of the Government, I want to say Thank You.”

Minister Humphreys also announced a special allocation of €1.5 million in funding to support the work of individual TidyTowns Committees around the country to assist them in their continued efforts to enhance their towns and villages.

This is the fifth consecutive year that funding has been provided to support these Committees and brings the total allocated since 2017 to €6.7 Million.

“The sense of belonging and pride of place that is achieved by being part of a TidyTowns group creates a wonderful welcoming atmosphere for both residents and visitors alike.

“Given the challenges faced by TidyTowns groups during the pandemic and the way in which they moved to an online entry process, I am delighted to be able to announce that I have secured funding of €1.5 million to directly support the TidyTowns committees who, through their efforts, bring out the best in their towns and villages.

“In total, 1,022 TidyTowns groups across the country will be eligible to benefit from this investment.”

“Today, I want to congratulate SuperValu who celebrate their 30th anniversary of partnership with TidyTowns and sponsorship of the competition. The competition continues to attract new entrants and new awards and it is getting stronger every year.

SuperValu continue to show fantastic support for the competition through their financial sponsorship, their commitment to improving and growing the competition and through the dedicated support at a local level provided to TidyTowns groups by their network of local retailers.”

“On behalf of SuperValu I would like to congratulate Ennis for being named Ireland’s Tidiest Town for 2021. It is a fantastic achievement and is the result of incredible work and dedication by the committee.

The outstanding efforts and achievements of the category winners, and indeed all of our committees across the country deserves significant praise and recognition. 2021 was another landmark year for SuperValu TidyTowns. We now have a record 1,022 groups engaging in the competition, with a record 847 entries this year. I’d particularly like to mention the new committees and encourage their participation into the future. The level and quality of the projects that you all delivered across all categories is astounding.

At its heart, the SuperValu TidyTowns competition is the public expression of the work countless individuals undertake to build community spirit and make their local area a better place in which to live and work. The incredible committee members, in collaboration with our network of independent retailers, share our desire to build thriving, sustainable communities.

Mr. Allen went on to say,

“As long-term supporters of TidyTowns, we at SuperValu have seen first-hand the competition grow and evolve over time. This year, perhaps more than ever, we have seen an increasing number of wonderful initiatives that focus on biodiversity, conservation and other important issues that are critical to creating sustainable communities. This is something I welcome and encourage.”

The SuperValu TidyTowns competition is organised by the Department of Rural and Community Development and sponsored by SuperValu who have sponsored the competition since 1991.

Full details of all this year’s winners are available at www.tidytowns.ie and at www.supervalu.ie

The Department of Rural and Community Development Press Office